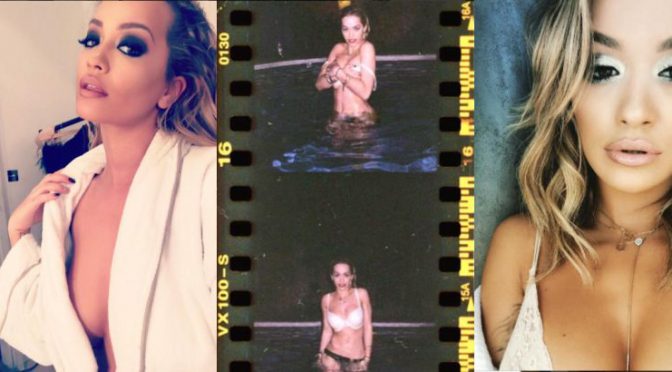 When Rita Sahatçiu was born on 26 November 1990, her birthplace Pristina, SFR Yugoslavia (present-day Kosovo) was embroiled in a war. Her parents moved Rita and her siblings to London when she was just one. Rita Ora may be a global star today, but she has never stopped talking about the hard times her family went through. Which is just one of the reasons why this successful beauty is such a special girl.

Rita Ora, her first name a tribute to Rita Hayworth and Ora, meaning “time” in Albanian, the surname used by her parents when they moved to London because British people found it hard to pronounce her real surname, never felt the need to change her life story or lie about her family’s hardships. On the contrary, the stunning girl has been very vocal about the difficulties they had to overcome to make it.

Speaking to the Evening Standard about her childhood, Rita said: ‘We lived in Earls Court, on the Old Brompton Road. One room for all four of us, my sister (Elena) annoying me by doing her times tables when I was trying to sleep.’

“The word ‘refugee’ carries a lot of prejudice,” she said. “But it also made us determined to survive. When you put anyone into an alien environment, where other people aren’t completely comfortable with them being there, they are automatically going to be defensive. It’s the rule of the jungle, right?”

The successful beauty added that her parents worked hard to make a living – her mother studying medicine during the day and working as a waitress by night. These days her mother, Vera, now works as an NHS psychiatrist.

Her father, Besnik, bought a pub in Kilburn and they slowly made more money and were able to move to a better area in London.

Rita attended the prestigious Sylvia Young Theatre School. Her first singing performances started in her father’s pub and she also did open-mic sessions in places around London. When she was just 15, Rita’s mother was diagnosed with breast cancer. The teenager had to stop going to school to support her mother who, thankfully, managed to survive the illness.

She made a few cameo appearances on Craig David, Tinchy Stryder and James Morrison’s songs, but the defining moment of her career was when her manager, Sarah Stennett, introduced her to Jay-Z. The music mogul signed her to his record label and the rest, as they say, is history.

Rita Ora has had a series of chart-topping hits, such as “Hot Right Now” (2012), “Radioactive” (2013), “I Will Never Let You Down” (2014), “Poison” (2015), and “Your Song” (2017). She has done a number of collaborations with big music names, like DJ Fresh, Calvin Harris, Chris Brown, Tinie Tempah, and Iggy Azalea. The multi-talented beauty has also appeared in a number of TV series and films, like “Empire”, “Red Band Society” and “Fifty Shades of Grey”, while she has participated as a judge on the “X Factor” and “America’s Next Top Model”. The sexy blonde has struck a number of lucrative endorsement deals.Her much-anticipated second music album was very recently announced to drop this autumn, after 5 years and a legal battle with her first record label, Roc Nation. Rita made the exciting announcement during an Instagram live broadcast which made her millions of fans super happy.

Juicy and toned Rita is far from a wallflower. Never one to shy away and cover up, Rita has made some very hot appearances and she’s had some high-profile relationships. In 2009, when both stars were just starting out, she was in a relationship with Bruno Mars about whom she has said: “It was love at first sight. I was 18 and starting out. I thought: Wow, that’s just the world’s greatest guy!”

From 2011-2012 Rita was in a very well-documented (as was to be expected) relationship with the male sibling of the Kardashian clan, Rob. Rob accused her of cheating on him, to which she later replied, “‘I never thought it was actually a relationship.”

But the most high profile of Rita’s relationships was with singer/ producer/ prodigy Calvin Harris. They went out from 2013 to 2014, but it all ended amid bitter words and accusations, with Harris going so far as to forbid the successful beauty from using the songs that he had produced on her album.

Currently, the 26-year-old girl is said to be in an on-off relationship with musician Andrew Watts (27).

With her talent, charm, and determination, this already successful beauty is expected to take the world by storm once her second album is out. We would tell you to keep your eyes on her – but we know there’s no need to ask you that because it’s almost impossible to take them off her anyway.