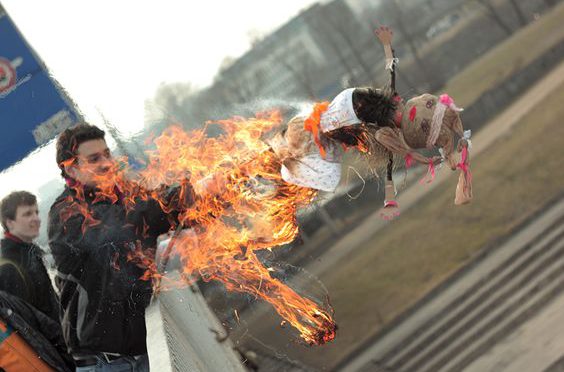 Ah, spring! Flowers are in bloom, the world thaws from winter’s chill, and adults and children alike go skipping through the park, happily greeting the new season. In Poland however, spring is heralded by burning and drowning a demon witch in effigy while children sing songs about her death.

Marzanna (also known as Morana, Morena, or Mora depending on region) was a Slavic goddess of winter, night and death. Although she is generally referred to as a goddess, some scholars consider her a demon or a high-level witch. She symbolized the destructive power of winter. Her name most likely derived from the Old Slavic root mar or mor, which is associated with death.

Although Catholicism prevails today, in Old Slavic lands, winter’s snow cover tended to last well into March or even April. Winters were long, harsh and extremely cold. Such conditions made living and surviving difficult. Winter could mean death through famine, extreme cold, and disease. It could cause death of livestock, resulting in loss of livelihood and food. Therefore, it is no wonder the Slavs felt a need for a deity for this difficult period.

Like most pagan deities, Marzanna’s myth came about as a way to explain cycles of nature that were not yet studied by or understandable to the general population, a single figurehead into which people could pour all of their frustrations, fear, and anger about winter, which was truly dreadful for many. Must be the witch’s fault!

Since it was her fault, she had to die so spring could come. That makes perfect sense in the pagan world, but what’s remarkable is that this particular tradition has endured to this day, and that it’s largely practiced by children.

The folk tradition was the ceremonial burning and drowning of her effigy at the end of winter to welcome spring (usually on March 21st, the vernal equinox). A straw figure was made, which was ceremoniously carried through the village in a procession and taken to the nearest river to be burned and drowned. Yelling at her was often involved.

These days, children construct their own effigies in school and take a field trip to light them ablaze, with adult supervision of course, and everyone gathers to toss the witch dolls into a body of water. Water has the power or renewal and rebirth, so the sacrifice of Marzanna naturally brings about the birth of spring.