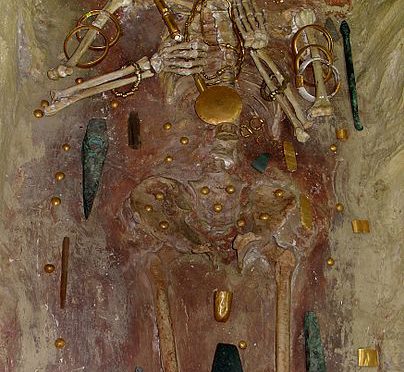 Archaeology is a very hopeful science. They study and dig, sometimes finding nothing at all, and then all of a sudden history-making finds can be unearthed quite by accident in an unplanned location. Such was the case in Bulgaria in 1972, when an excavator operator digging a trench for an electric cable in the western industrial part of the city of Varna discovered several gold objects, and what appeared to be pieces of ceramics, in the soil discarded by the machine.

Upon hearing of this accidental discovery, archeologists from the Varna Archaeological Museum started excavations on the spot. They discovered a graveyard (a necropolis in scientific terminology, meaning ‘city of the dead’), belonging to an unknown prehistoric settlement.

Archaeological scholars found an immense amount of gold contained within the graves, in a few different configurations. The gravesite’s specific settlers’ origins could not be determined, but it was determined to have been of the Eneolithic period, when there were three different ways of burying the dead: laying on their back with the body stretched out, with a huddled body, with arms and legs curved (mimicking the fetal position and expressing the idea that a man must leave this world in the way he came into it), or the “Symbolic Burial.”

In a Symbolic Burial, the bodies were cremated or sent to sea, and symbolic objects were buried instead. In each type of burial, the objects buried with the bodies were of a rich and varied inventory of items that were thought to serve the dead person in the next world.

The graves contained vessels of clay, instruments of copper, stone, flint and bone (knives, axes, and cutting blades), jewelry made of metal, sea-shells, a rare kind of quartz, and china clay. There were also a large number of idols found, made of flat bones in the form of stylized human figures. Each of the graves contained between 2 and 5 vessels, with the tools and instruments placed in the hands of the dead person.

But mostly there was gold. So much gold. Trinkets and figurines lined the graves, and the bodies were adorned with jewelry. Symbolic Burials were the least common at the Varna necropolis, but the graves with no skeletons also contained the most gold.

In the graves with skeletal remains, the glittering gold jewelry and adornments had been placed exactly where they belonged: bracelets on the wrists and above the elbows; earrings, made of thin gold wire, on both sides of the head; cylindrical gold beads on the chest, between the ribs, as well as gold figures of people and animals which obviously had a ritual function as totems or guides for the afterlife.

It is interesting that in some of the symbolic graves there were human faces made of clay surrounded by rich decorations of round and rectangular gold plates. The forehead was decorated with a gold wreath or crown. Where the arms were supposed to be stood beautiful ritual axes of stone with gold handles. This must have been a way to indicate the high social position of the person buried.

The nature and special features of the Varna necropolis, and especially the fine work of the gold objects employing hammering, piercing, and cutting, suggest a high level of technology, well-developed social stratification and cultural processes, and spirituality. This evidence is what leads experts to consider Varna, the largest known prehistoric necropolis in south-eastern Europe, to be the cradle of European civilization in Europe.

More than 300 graves were uncovered in the necropolis, and between them over 22,000 exquisite artifacts were recovered, including over 3,000 items made from gold, with a total weight of 6 kilograms, and pieces from the excavation have been displayed in numerous museums, including the National History Museum in Bulgaria’s capital city Sofia.