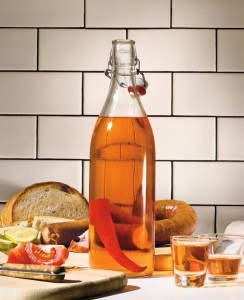 “Horilka” is the Ukrainian term you’ve never heard for something you might have frequently—Vodka. There are several anecdotal tales of regional twists on vodka (like horilka) that go back centuries. The term “Horilka” comes from the Ukrainian verb hority, or “to burn.” It seems logical to assume that this would refer to the burning sensation of the drink, or even the spiciness commonly found in horilka (flavored as it is with red pepper), but in reality, it refers to the fact that alcohol literally burns when lit on fire.

Originally, vodka was not predominantly made from potatoes (as is common today.) While potatoes are used for certain vodkas, vodka and horilka are primarily grain based. In fact, the development of vodka predates the introduction of the potato to Europe by at least a century.

Ukrains’ka Horilka z pertsem, or Ukrainian horilka with pepper, is considered the king of flavored vodkas by those who have tasted the real deal. It is a truly fiery spirit, made by steeping hot red peppers in horilka. The pungency of the pepper uniquely complements the bitterness of the alcohol, making for the ultimate vodka experience.

True Ukrainian pepper horilka is difficult to find these days, but it’s out there, and you can also make it quite easily at home with little effort and a lot of patience. All you have to do is buy yourself a bottle of clear Ukrainian vodka (or a more standard vodka like Smirnoff, Absolut, or Stolichnaya.)

Purchase one or two red peppers: a Ukrainian hot pepper would be ideal, but other types will work as well, and you can even experiment with different pepper flavors. Cut the top off the pepper and gently shake or cut out the seeds. Pour off some of the vodka so that you can get the pepper(s) into the bottle, then return the poured-out vodka to the bottle and seal it.

Now here’s where the patience piece comes in: you can let your peppers steep for a week or a month—the time frame is up to you, but of course the longer you wait, the more fiery and flavorful your beverage will be. Store the bottle in a cool, dry place, or in your refrigerator if you’re in a warm environment. One great recipe even calls for waiting a full six months before chilling your horilka in the freezer and serving it.

Horilka is traditionally consumed straight, from shot glasses or small cups, and it’s ideally served with some sort of food as a chaser. Dark breads, cold cuts, and salted, pickled vegetables are most often used as chasers, but if you’re feeling fancy, try pairing it with a Ukrainian dish like varenyky (filled dumplings), holubtsi (cabbage rolls) and borscht.

Regardless of what you follow it up with, trust us—you need to try the spicy goodness of horilka for yourself. Enjoy your horilka with good food and company, as is the Ukrainian custom.