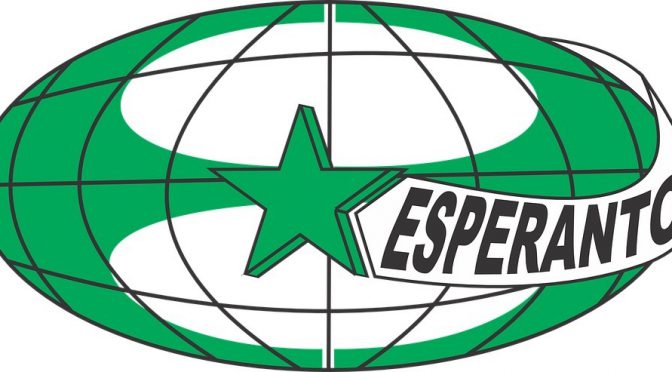 Esperanto may not exactly be “pretend,” as it is a real thing that we are about to discuss, but it is a planned, or constructed, language, not the native tongue of any group of people or region.

It was intended for use between people who speak different native languages, developed during the period of 1877-1885 by an eye doctor, Dr. Ludwig L. Zamenhof of Poland. Dr. Zamenhof, who was born in the city of Bialystok, grew up in that polyglot area, meaning that there were several languages in common use there at once. Observing conflict between the multi ethnic groups in his neighborhood, he became convinced that a common language would be necessary to resolve many of the problems that lead to strife and conflict.

He rejected the major languages of his day (French, German, English, Russian) because they were difficult to learn and would put their native speakers at an advantage in discussion with respect to those who did not speak them natively. He also rejected the two “dead” languages with which he was familiar, Latin and Greek, because they were even more complicated and unwieldy than the major languages currently in use. He began work on his planned language, which he would eventually call “Lingvo Internacia”, as a junior in high school, and eventually published the first textbook of the language (for speakers of Russian) in 1887.

The word “Esperanto” itself means, in Esperanto, “a person who is hoping”. Dr. Zamenhof had been using “Docktoro Esperanto” as a pseudonym while writing his first book, and it was gradually adopted in popular parlance as the name of the language itself.

So an idealistic teenager who was angry at his hometown created his own language. But, unlike other constructed languages like J.R.R. Tolkien’s Elvish tongues from The Lord of the Rings and Marc Okrand’s tlhIngan Hol (Klingon), Esperanto was created with the lofty goal of unifying the world, not as dialogue for fictional sci-fi creatures.

It almost got there, too: In October 1966, the UEA (Universala Esperanto-Asocio) presented the Secretary General of the United Nations with a proposal recommending that the UN solve the language problem by supporting use of the International Language, Esperanto. The petition was signed by almost a million individuals and by 3,843 organizations representing 71 million more people from all over the world.

It was vetoed though, and the language never really caught on like Dr. Zamenhof had hoped. Esperanto was constructed to be easy to learn, without the unnecessary variations in grammar and spelling of many other languages, notably English: there’s absolutely no reason why tomb, comb, and bomb have three different pronunciations, for example, and as widespread as English is internationally, it is incredibly difficult to learn.

The power differences that come with being a non-native speaker while traveling, or speaking different languages from others are also undeniable, and as such the idealism of Esperantists is truly beautiful. Here’s the thing, though — world unity is a lofty goal, and it’s also not one that everyone is willing to take seriously. Also, with inevitable roots in Latin and utilizing already-existing cognates by design, Esperanto can seem a bit…well, silly.

Check out these English words and their Esperanto translations:

Of course that’s just a handful, but you can recognize the other languages there, and the whole thing can come off like someone who doesn’t really speak Spanish giving it the old college try anyway.

But don’t tell that to the devoted Esperantists across the world, with especially large pockets in Europe, as well as China, Japan and Brazil. It’s estimated that anywhere between 200,000 and 2 million people speak the language worldwide, and some even write whole blogs defending their language from (its many) detractors.